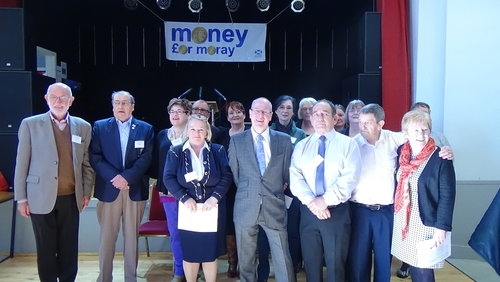 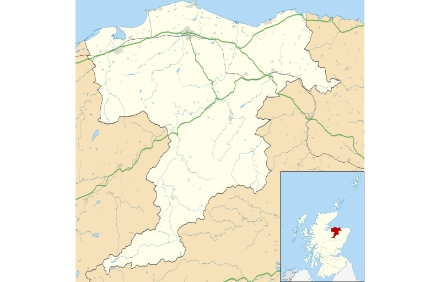 Money for Moray comprises of 15 members and the group runs very much on a consensus basis with no single member having authority over any other. Instead of running like a normal “board” the group uses facilitation as the means to organising and making their events work and work well.

At the start of the process, when PB was practically unheard of in Moray, they received invaluable support from Moray Council`s Community Support Unit but after a couple of early events the group decided to go it alone. They have also worked with Participatory Budgeting Scotland (PB Scotland) and the Scottish Community Development Centre (SCDC) to gain the knowledge and skills to set up a PB exercise.

Membership of the Money for Moray team comprises representatives from Community Councils, Area Forums and the Moray Federation of Community Halls and Associations (MFCHA). The team operates on an entirely voluntary and independent basis and its members are drawn from all parts of Moray and is the only Participatory Budgeting (PB) working group in Scotland made up entirely of volunteers.

The Money for Moray team was initially asked to deliver, via the PB process, £120,000 of funding - £60,000 was received from the Scottish Government and this was match funded by Moray Council.

Community and voluntary groups in rural areas of Moray were invited to apply for between £200 and £5000 for projects that would benefit their local economy. Groups that submitted applications which met the criteria were then invited to do a two minute presentation on their project at one of two public events held in the Grant Hall at Rothes. The public then voted for their favourite 10 projects. A total of 23 groups presented at the May event, and 27 at the June event, with 17 groups being successful on each occasion.

Following on from the success of the pilot scheme, the Money for Moray team applied in 2017 to the Scottish Government’s Community Choices fund to run a second scheme, and secured £40,000 funding to be allocated to projects which tacked social isolation across Moray.

This round of funding resulted in 18 groups presenting to more than 150 people who attended the public voting event. Kevin Stewart, Minister for Local Government & Housing, was in attendance and outlined the Scottish Government's commitments to PB up till now and emphasised that community-led events such as the Money for Moray event will continue to be a focus in the future.

Moray Council then allocated a further £55,000 to the Money for Moray team. Approximately 130 members of the public voted which resulted in 19 community groups receiving funding for projects which would help boost the local economy of Moray.

On March 18th 2018, the Money for Moray team delivered a further £60,000 of funding – this time applications were being sought for projects that would deliver an improvement to the Health and Wellbeing of the people of Moray, irrespective of which age group they belong to.
The event was hugely successful with applications totalling around £186,000 being submitted and standing room only available at a packed Grant Hall at Rothes.
A full list of successful projects can be found it the press release below.
Thank you to everyone who participated.

Following the most recent PB exercise the members will now go back to searching for further funding they can leverage into Moray to be disseminated through PB.

Money for Moray are back!

3rd March 2020
Please see the press release below for details on the latest round of funding available....

To find out more about Participatory Budgeting, what it is & how you can get involved click here » 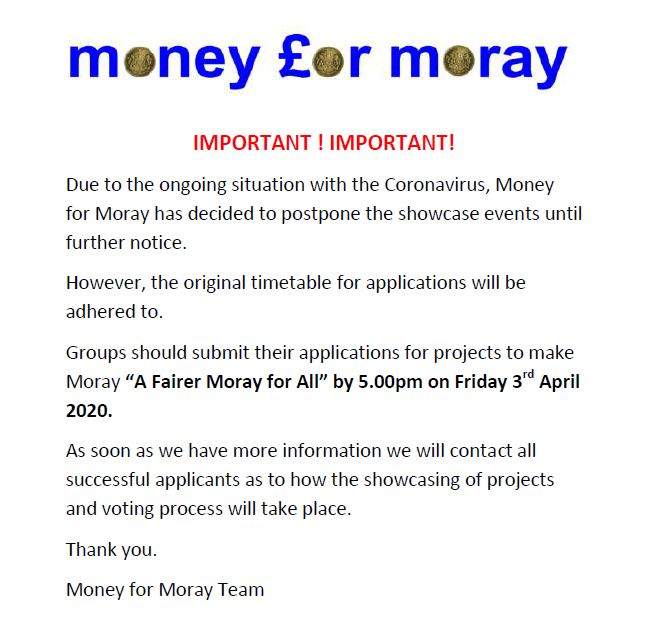 A FAIRER MORAY FOR ALL 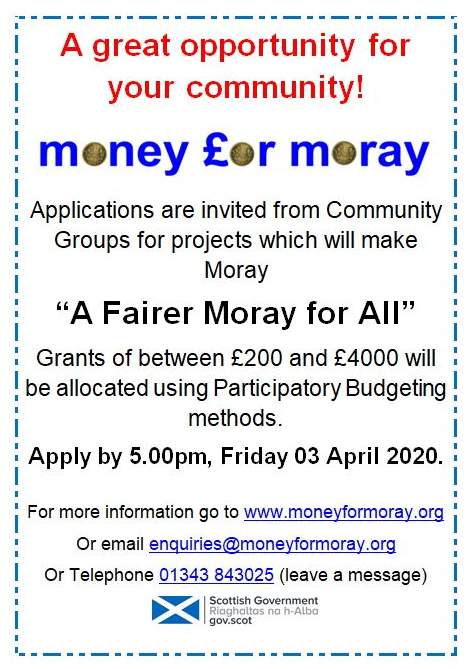 Over the last four years the Money for Moray (M4M) Team has disbursed a total of £275,000 to 91 organisations throughout Moray. Most of these funds came from the Scottish Government. In a process called Participatory Budgeting (PB), members of the public voted to decide which organisations received a share of the funds. Preparations are underway for a further round during which M4M will give out a further £150,000 from the Scottish Government’s Empowering Communities/Investing in Communities Fund.

This funding has been obtained to provide “A Fairer Moray for All” and the main themes are Health and Wellbeing, Poverty, Growing a diverse and sustainable economy, and Accessibility. Groups which are improving the lives of people, particularly vulnerable and young people, are encouraged to apply for a share of the funds to tackle issues such as food insecurity, fuel poverty, transport difficulties, literacy and employability.

Although the M4M group will lead on the project, some work will be undertaken by staff from Moray Council’s Youth Engagement Team which will support the involvement of our young people. The Engagement Team supported the successful YP (Young People) Decide PB project, which was funded by the Community Choices Fund 2018/19. YP Decide was organised with schools and the young people took the decisions during the project.

This new round of funding wishes to capture the energy and excitement YP Decide created under the banner “YP Decide - A Fairer Moray for All”.

An initial event was held to identify the priorities and M4M have built these into the application forms.
Applications will open on 9 March 2020 and close on 3 April 2020.
Application forms can be submitted on the M4M website moneyformoray.org which has more information.
A facebook page will be set up.
Members of the public will be encouraged to attend events in Forres Town Hall on 16 May and also Longmore Hall Keith on 30 May to vote on which projects receive funding.

Alastair Kennedy, Chair of the Joint Community Councils of Moray (JCCM) and leader of the M4M Team said, “I am delighted that the M4M PB Group, through the application to the Scottish Government`s “Investing in Communities” Fund via the JCCM, has once again leveraged substantial funding into Moray. This time the theme of the PB exercise will be “A Fairer Moray for All” so we hope the funding will help alleviate poverty in Moray. Part of the funding will go to each Associated School Groups to allow another YP Decides PB exercise to be undertaken by our young people who, with support from the Moray Youth Team, will take the decisions on how their funding will be allocated under the same theme”.

Looking to the future, the Moray Council will be required to allocate a minimum of 1% of its budget to be decided by a PB process allowing the Council to more fully engage with the community and to increase participation in decision making. This will ensure that budgets are allocated to those areas that are a high priority for communities in terms of need.